An attempt at a new year's resolution...

As promised earlier on in the week in my new year's resolutions, I am attempting to do some nail art! (Just to say this isn't my idea, I am starting off by following some ideas of Youtube. This is from MissJenFabulous!) Now before anyone gets too excited, it's not going to be hung in a gallery and really detailed because it's the first one in a hopefully long line of nail art posts. (That is a tad hopeful for me...) It's going to be really simple so that not only other people can do, so that I can do it well also. 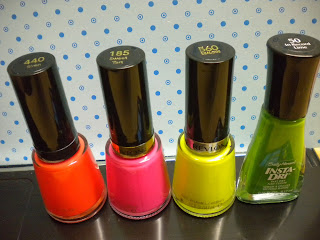 The brighter the better, these aren't neon nail polishes just very bright colours. They were all purchased from a £1 shop so I am unsure if these are available in high street shops... They'd be easy to find on Amazon/Ebay or just use a different high street brand. The ones I am using are: 440 Siren, 560 Zealous, 185 Sweet Tart by Revlon and 50 In Record Time by Sally Hansen. First things first, all the nails were painted with one coat of each nail polish on different nails. 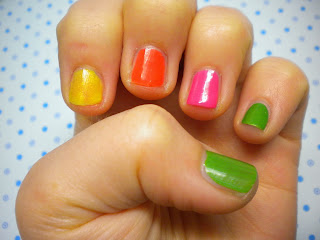 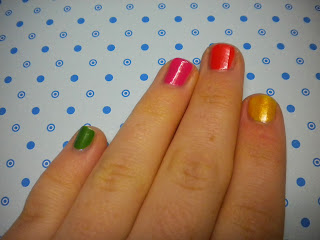 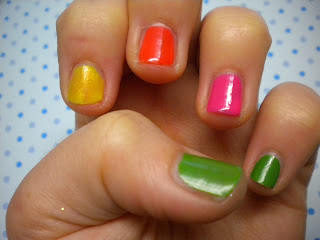 Like so. Two coats aren't really needed unless the nail polish hasn't covered the nail well enough - but if this happens I'd recommend using another nail polish seeing as the next step is painting on top of the first coat which won't get great effect if it's not opaque enough! Next thing to do was to paint over the top of the first coats in a different colour with three strokes of straight lines which are shorter than each other like this: 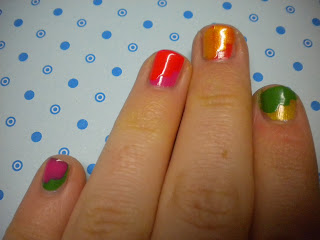 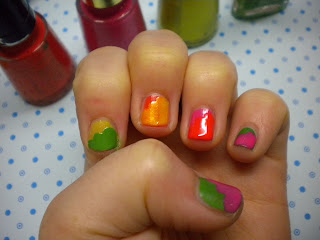 Just a reminder this is the first attempt so it isn't that brilliant at the moment but I promise the end result is quite good and different to the normal nail polish reviews. The next step is to do the same but with another colour or the same colour as the first coat in the same design a little bit further down the nail. This is what it should hopefully look like... 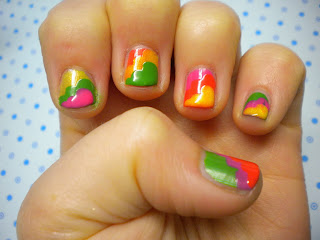 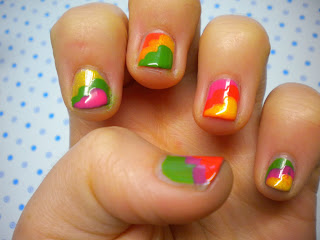 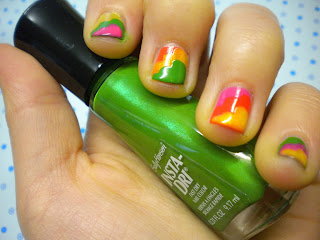 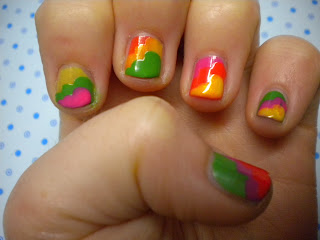 Tad da!
Rather bright and in your face design, I have to admit. Also good way to show off the really out there or cool colours together, cool combination would be black, red and gold which hopefully I'll be trying soon. But these colours were brilliant for the designs so I'd definitely recommend them and use them again.﻿
﻿
﻿
﻿
Posted by Gracithey at 07:19