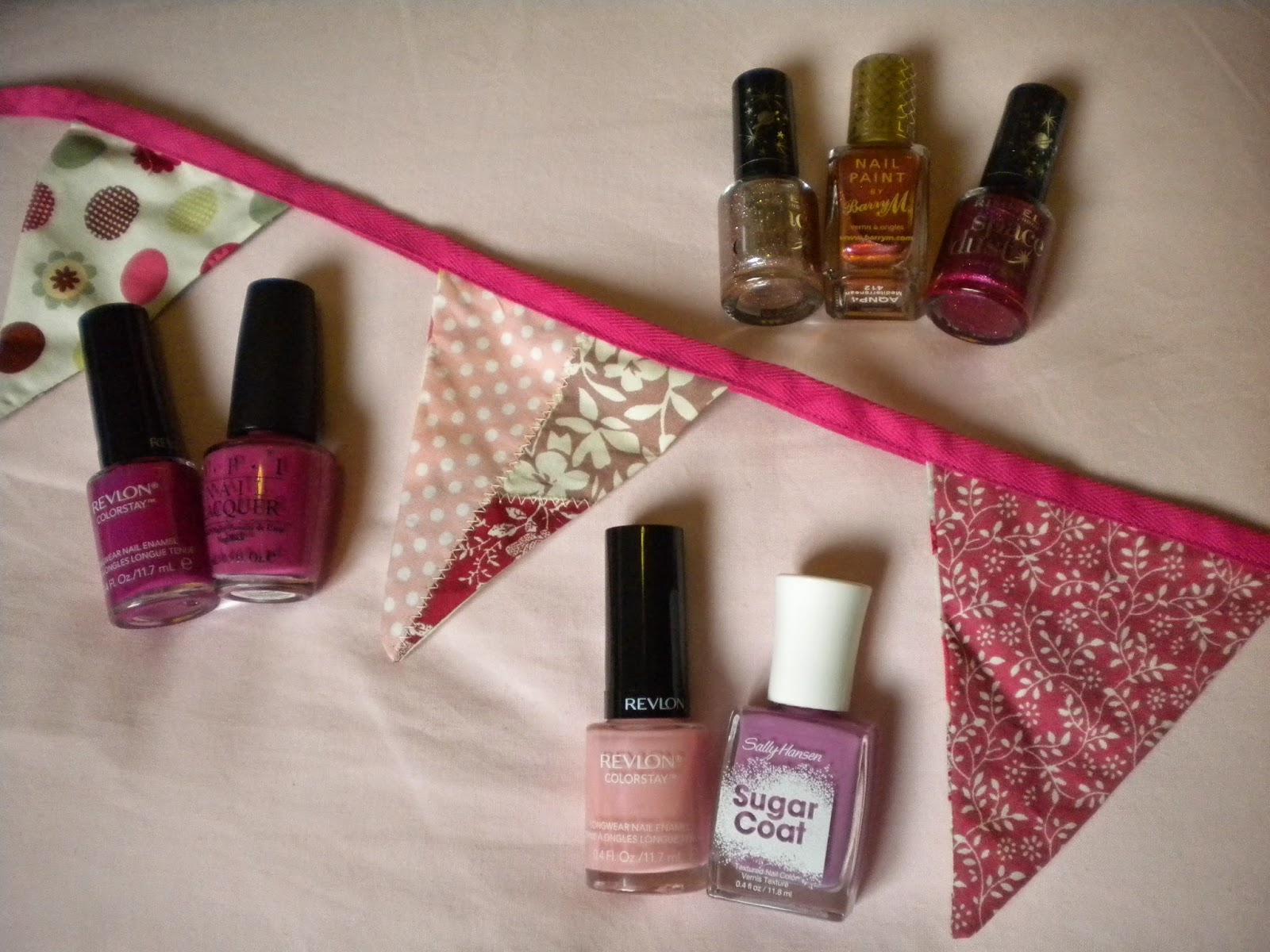 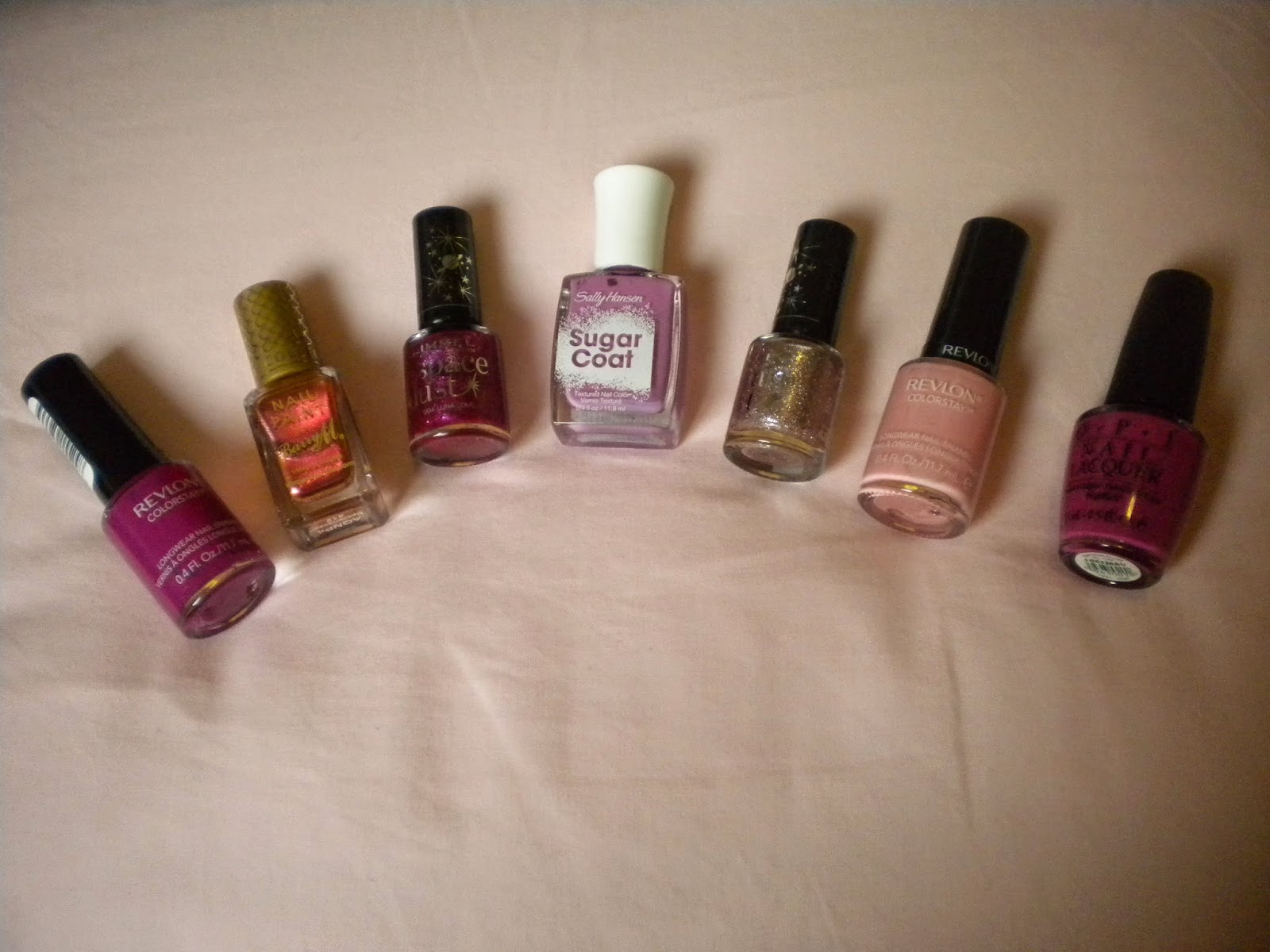 It's going to be a totally pink post today, so very typically girly which isn't normal. But it needed to be done seeing as there's been Top Picks posts for nearly every other colour in the massive stash, I wouldn't want to deprive you guys of your pink fix! Also these polishes are some of my favourites and are worn quite regularly, it's just putting them all together makes it seem too girly. 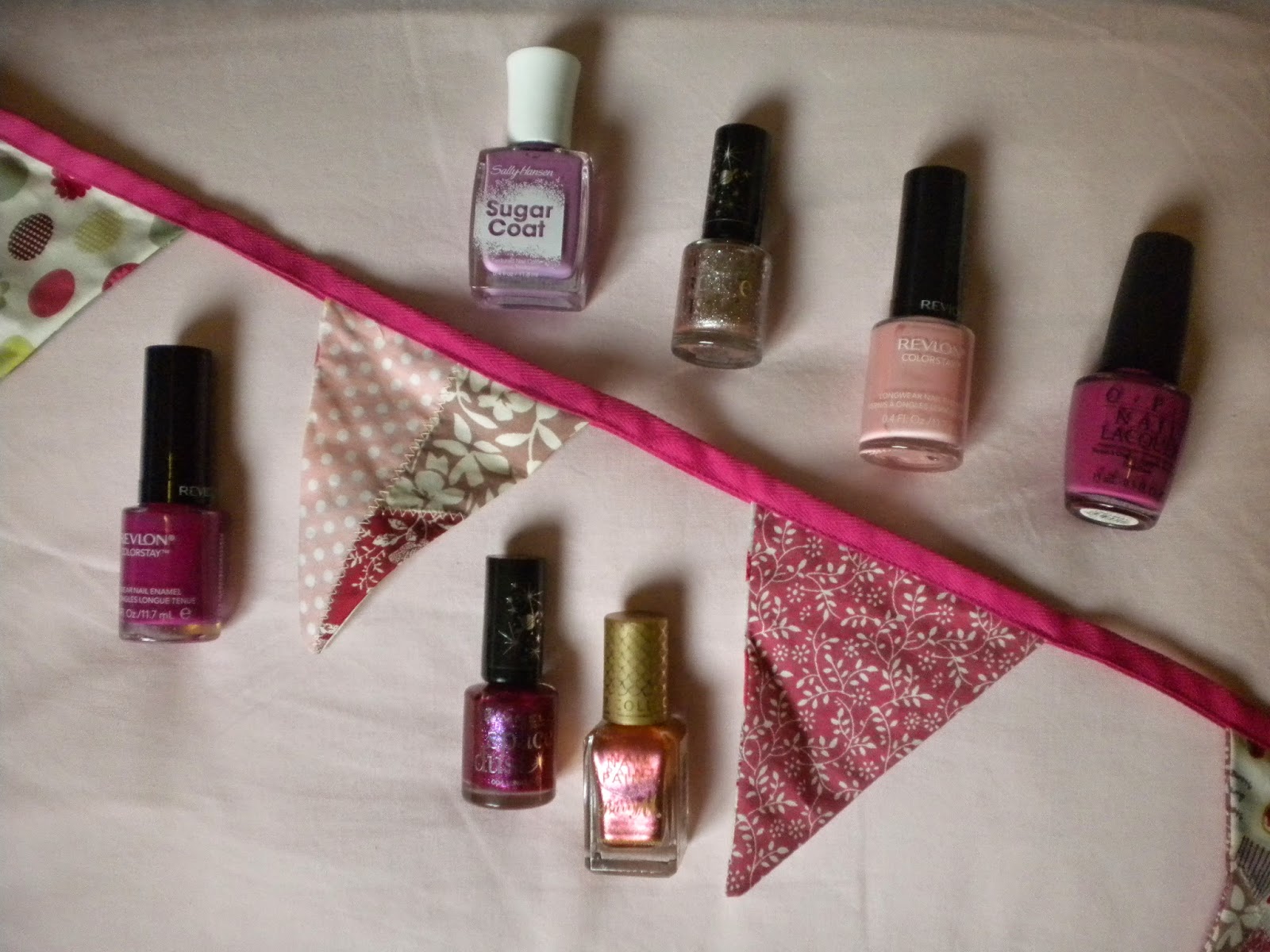 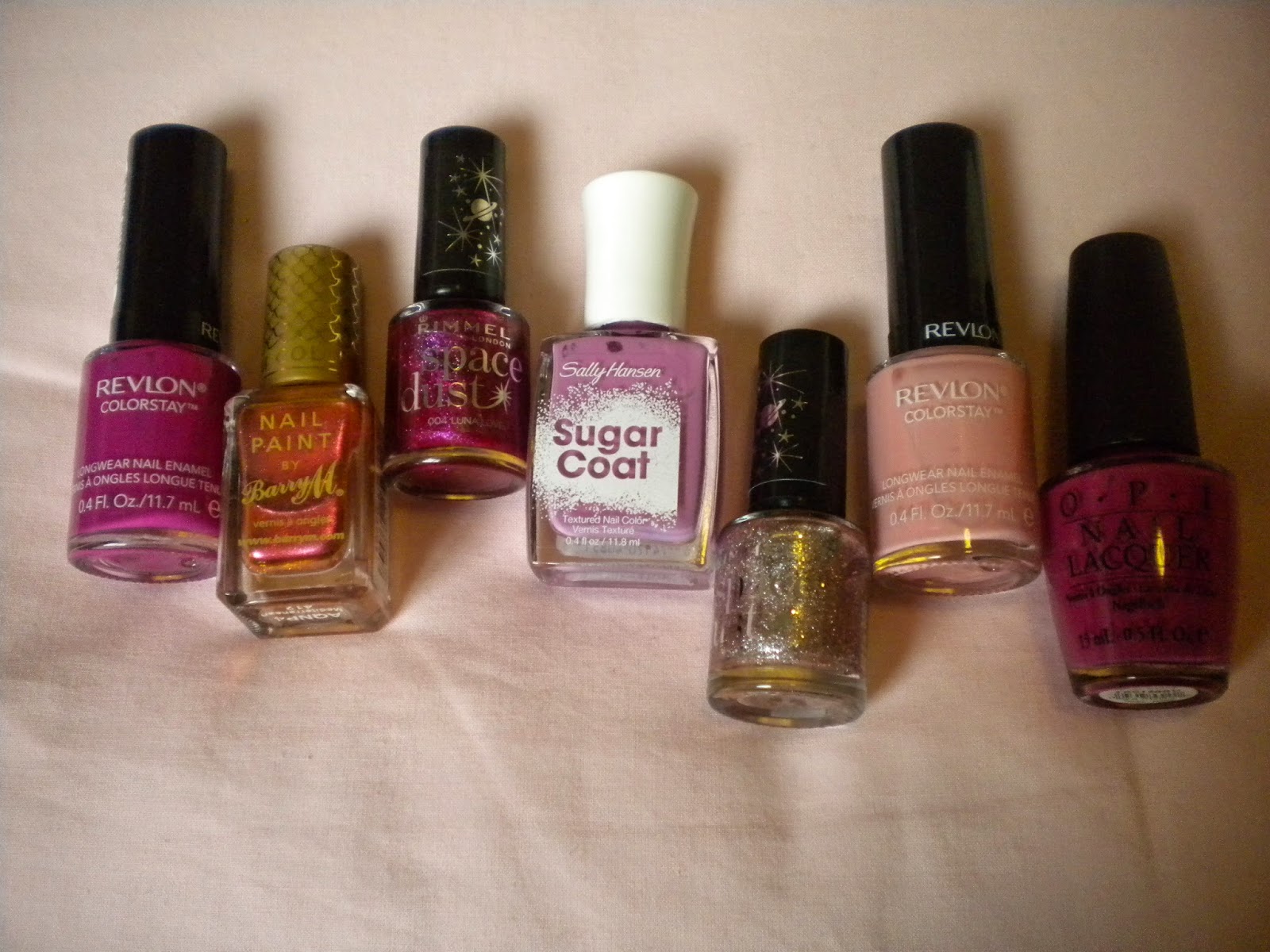 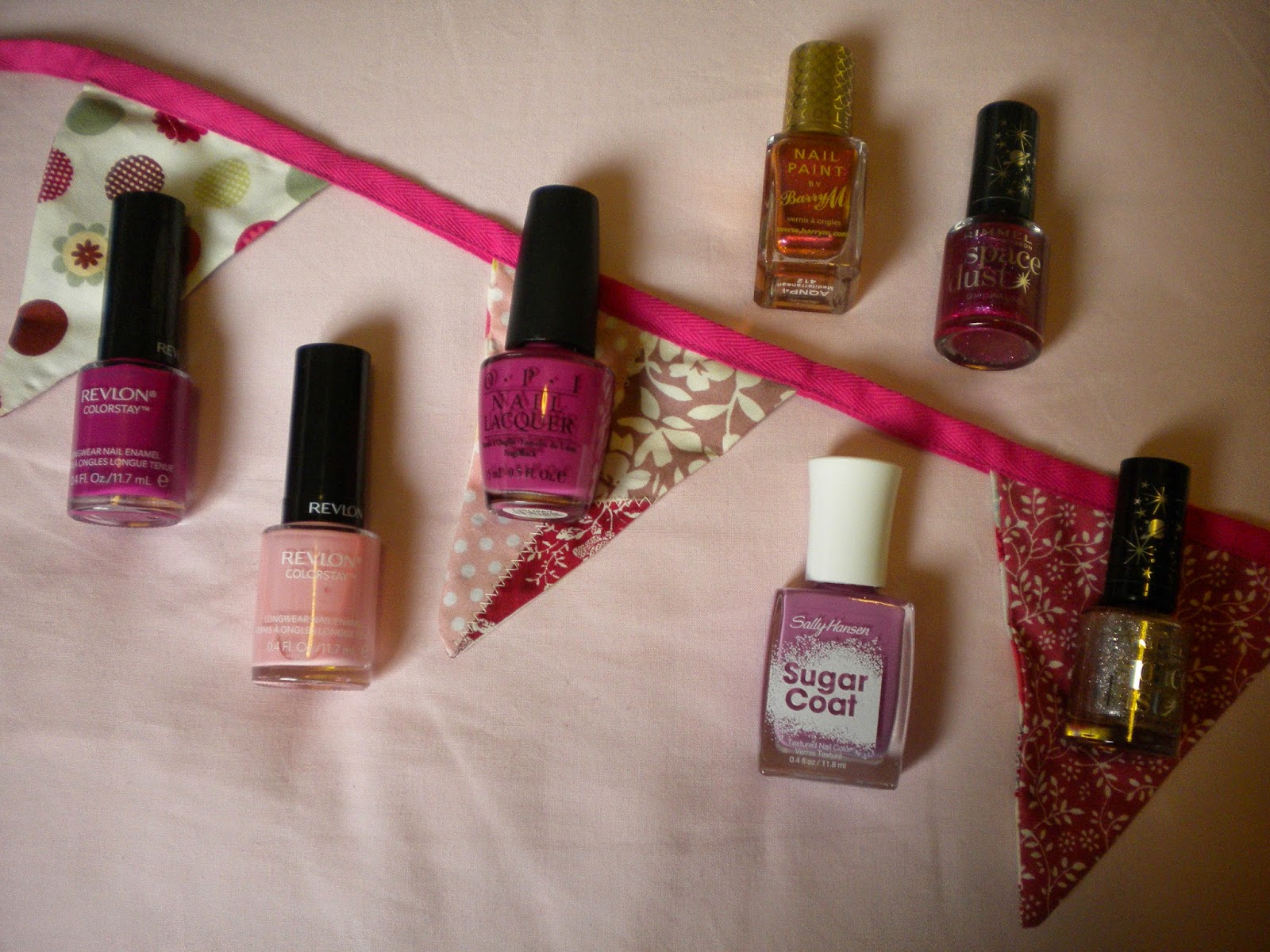 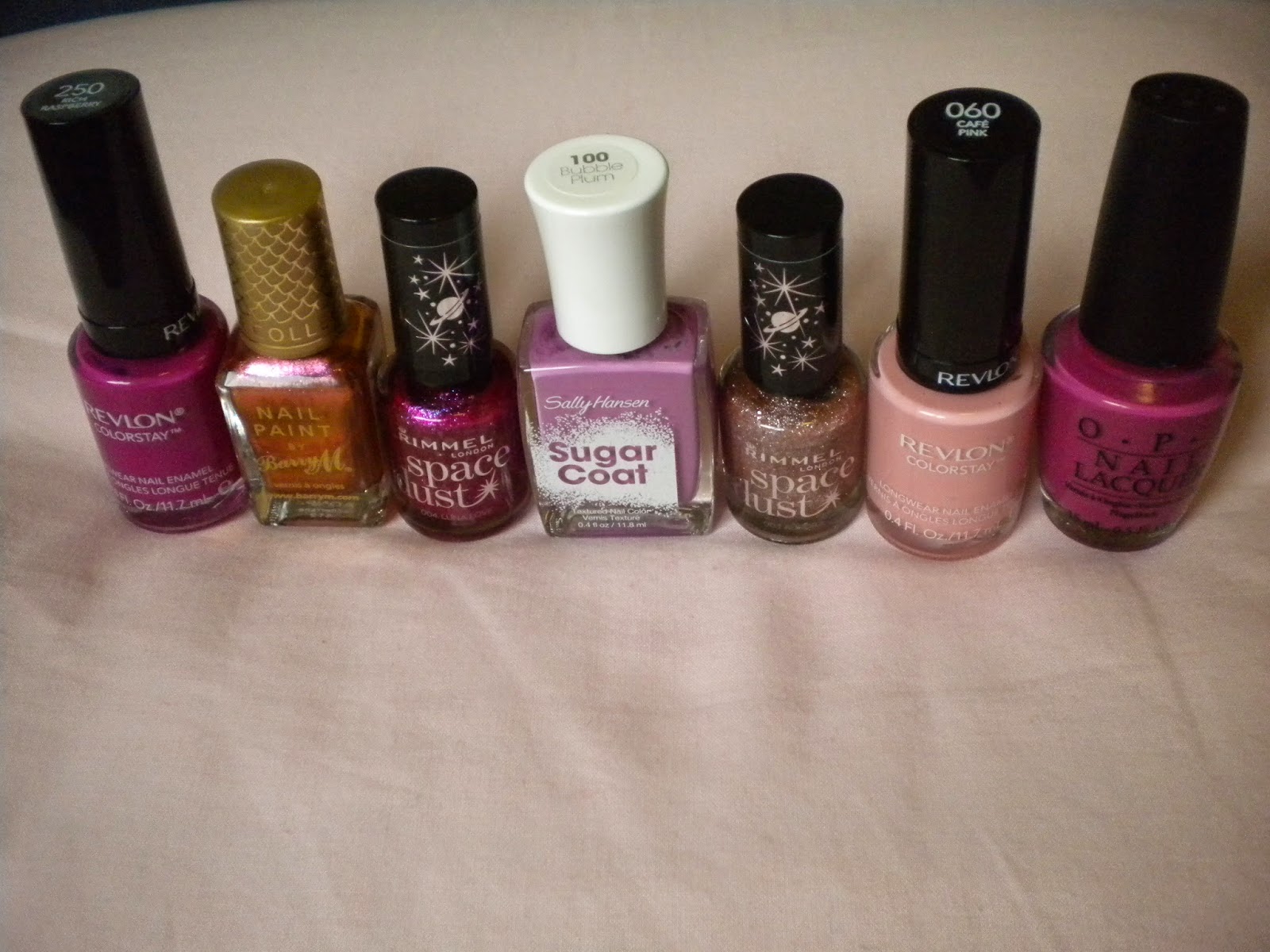 Are you all sitting nicely for your pink polish lowdown? There will be lots of information so you'll need to be taking notes... Just kidding, all you need to do is soak it all in. Here we go:
Let's start off with Revlon's Rich Raspberry, the name definitely gives it away as it's a lovely rich pink colour with no effects or glitters making it a mature pink instead of childish. It takes three coats to apply but is worth the wait. Following on is Barry M's Mediterranean which is an effect polish as it's a duotone. The combination of pink and orange doesn't sound good as an idea but it's brilliant on the nails as you look at your nails once they are pink and then the next time they are orange! I'm easily entertained. Next up is Rimmel's Luna Love which has only just been featured, but it's that good it's already appearing here. Luna Love is a dark pink polish that's textured glitter which is so cool, a real attention grabbing polish. Sally Hansen's Bubble Plum is another texturised polish but there's no glitter this time, instead it's a simple pink/purple texture polish. This sound's like it be a pain to put on and remove from you nails but it's not, making it a polish that's regularly used as it's easy peasy. Another polish from the Space Dust collection is Rimmel's Aurora which is a rose gold and pink textured glitter polish. Doesn't it sound amazing? Well it is, looks great on the nails and simple to apply in two coats. Toning the pink down a little is Revlon's Cafe Pink. This polish is a baby pink coloured polish, giving the nails a little rest from all the bright colours. It works really well as part of a nail art manicure as well as on it's own with a little more effort. Finally is OPI's Dim Sum Plum, this polish is a lovely simple pink which is slightly darker than usual pinks found on the high street. It's application is simple as the brush is easy to use and covers all of the nail, it dries relatively quickly. Dim Sum Plum's colour complements summer tones and tanned skin especially. ﻿
Posted by Gracithey at 09:30